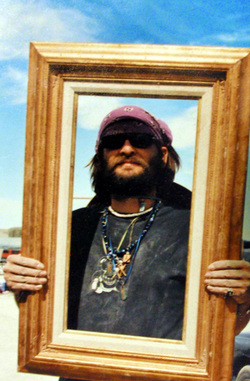 I was raised in Westport, Oregon, a small mill town on the Columbia River. After a four year Army enlistment, I attended Oregon State University, where I received a BFA in Fine Arts, and a BA in Graphic Design. Being stationed in Germany, and the subsequent travel oppurtunities available gave me a yearning for exploration and interaction a rural setting could not provide.
After a few years of living in Portland, I moved to San Diego and worked as a freelance sculptor for various giftware companies, from San Diego to LA. Under the tutelage of Willy Whitten, of Sculpture Design Studios;  I honed my craft as a sculptor and artist in general, making everything from people to unicorns, magnets to door bell covers.
While sculpting as a job, I used painting as my entertainment, my release. After a few years, sculpture jobs dried up.  The industry shifted over seas, and I began working a "real job" painting on my weekends, still my release.
In 2002 I went to Paris. It was there I finally decided to embrace art.
I worked and painted until 2004, when I became freelance. I left my job, and began taking freelance gigs as a faux painter, and painting in earnest at my studio on 7th Ave. It was then I also became affiliated with, and living at, the Voice 1156 Gallery. Located on the same block as my studio in downtown San Diego.
Over the next decade I developed my painting and sculpting skills, participating in shows in San Diego, and Los Angeles.
Endless summer, Ended. I found myself craving the seasons, the cool air, sleeping under blankets, and most importantly family. I came home to Oregon and moved to Portland.

These days you can find my work and I, at The Portland Saturday Market, March through Christmas Eve, every Saturday and Sunday. You can also check out new work and prints at The Alberta Street Gallery 1829 NE Alberta Street, PDX. I am also continuing to show in San Diego and at many galleries and fairs around the country.